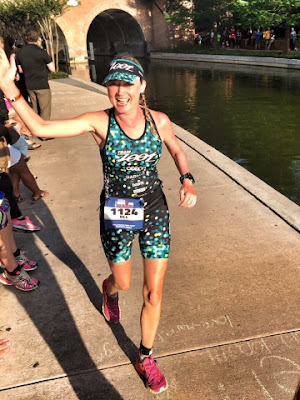 I knew on the bike that the run was going to be a challenge for me. I had forgotten my RA medicine and I was in a world of hurt. But I was going to do this ya'll!
My shoulder was nagging on the swim, but after the winds and struggle on the bike it was really bothering me. I had two surgeries from a bike crash previously - a clavicle repair and surgery on my shoulder. When I was in transition I got a really hard high five and it sent shooting pain from my shoulder down to my fingers. And that was it. It only got worse from there. But I was so freaking happy to be off the bike and one step closer to my dream!
In transition the volunteer was amazing. She took my bike shoes off and put my socks and shoes on for me! She put vaseline on my raw spots. I offered to sell her my bike! Lol! I was able to go to the bathroom which was a relief because I hadn't urinated in over 7 hours and I was worried about dehydration. I shuffled out of  transition, screamed thru some sunscreen (no fun with chafing), and set out.
I was slow going, but I was running at a super easy pace. Every step hurt every joint. I went a little way and had to urinate again which was so exciting because that meant I wasn't too far behind on my hydration which was such a huge concern for me. I didn't stop to refill on the bike and I was empty the last hour. Not a smart play I know, but fortunately it turned out ok. I saw my coach and told her I was not in a good place and needed my medicine. She told me I had plenty of time and to walk as much as I needed. I ended up behind a girl named Meredith doing a run 2/walk 1. I followed her for awhile and then approached her. We did the first loop together. She lives in Waco and teaches at Baylor (where I went to college). She also has four boys roughly the same age as mine. I was grateful she got me thru that first loop.
At every aid station I drank water and Gatorade. Twice I even had coke for the first time in 12 years! I ate bananas and grapes. I tried a cookie but didn't love it. But then I saw WATERMELON! I was ugly eating it. I just could not get enough! Nothing has every tasted better than watermelon tasted that day! 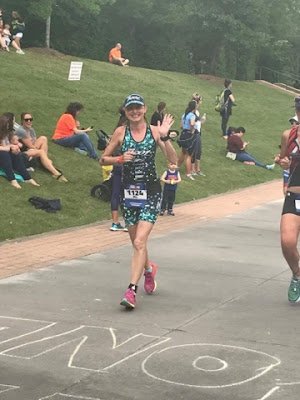 Rick was able to get me my medicine thank God. The second loop I took off and tried to run more than walk. Each step rattled my joints. And at this point my right arm was glued to my side and I was worried it was really messed up. My foot that I broke just 5 months ago was giving me trouble. During IM training my longest training run was only 10 miles due to my broken foot. In fact the last long run I had was 13.1 miles a year before at IM 70.3 Texas. I had already run further than that at this point. 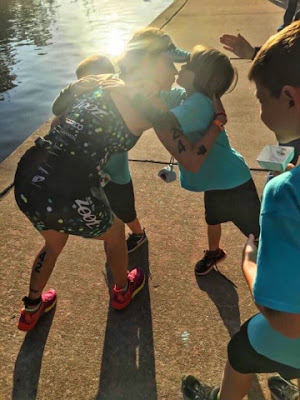 I had so much support on the course and I was so grateful! It's moments like these that kept me going! My family, friends, Zoot teammates, Strike Force Racing teammates, Mind Over Matter Triathletes, TriTats team, Conroe Triathletes, physical therapists from the Memorial Hermann Ironman clinic where I go, people I graduated high school with, people I used to teach with, IG and FB friends, volunteers, and perfect strangers. What a blessing to have so many people rooting for you! And all of these people are why I made it thru this run! It really was a lot of fun!! 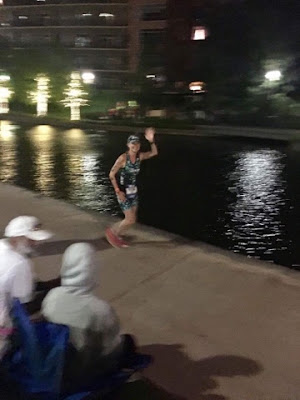 I couldn't stop smiling the entire time! Don't get me wrong, there were some smiles to cover grimaces in pain. And there were a few moments in the back of the Woodlands that were lonely stretches. But I was doing this when I was told I couldn't and that I shouldn't. I wasn't going to let anything stop me!!
By the third loop I was walking. I kept trying to run but I couldn't run a step without being in excruciating pain. And it was frustrating because I wasn't feeling tired, my muscles weren't feeling fatigued. I wanted to go and I couldn't. In fact the muscles that hurt the most were my cheeks from grinning so hard! I am a runner and everything in me wanted to run.
When I made it back around my crew was already at the finish line. I didn't see anyone. Then I heard my hubby call out my name and he told me to keep going and that I could do it! He had stayed back to see me one last time! It was just what I needed! I only had a little over a mile to go, but I was so slow I knew it would take me awhile. I still kept trying to run, but I couldn't go a step without intense pain. I could hear the finishers being called across the finish line. And then all of a sudden the chute opened before me..........

Posted by Iron Will Iron Jill at 7:26 PM