During transition in the morning before the swim start I had left with my bike computer in my bag. I was worried about not having it on the ride. I had given it to my hubby and he found a volunteer who put it into my bike bag for me! And that was a saving grace! 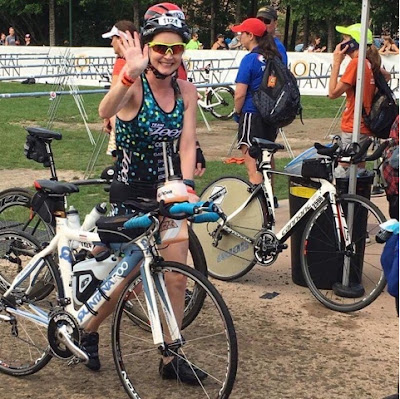 Anyone who knows me knows the bike and I do not have a love affair. Anyone who loves me was probably just about as scared about me being out on the bike as I was. But I got out of the swim and I was feeling calm and confident. I was super happy and excited. I got on the bike nice and easy without any troubles. 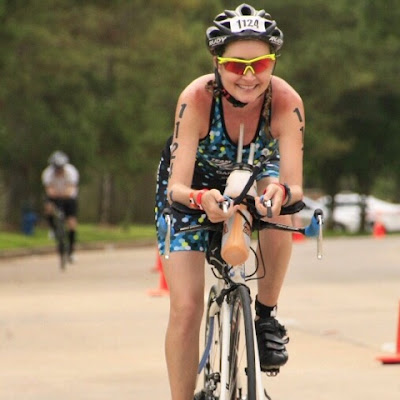 And it started out great! I was flying! I was feeling good! I was feeling super confident. But I kept reminding myself that anything could happen and I had to be prepared. I didn't want to get too comfortable because I wanted to be prepared to handle anything that came my way! But I did start doing calculations of where my race could go and I was getting excited!  My hubby, one of my boys, and some friends surprised me and came out to the Hardy Toll Road to see me ride! When they saw me I was in aero and feeling fine!! I knew they would be excited to see me in aero because I NEVER ride in aero. Meanwhile a cool front was pushing thru. The sky was getting dark and the wind was picking up. I made the turn around and it started getting harder. I passed my family and friends again and I was still smiling. But it was getting harder and harder. They passed by as they were heading out in the car and honked a goodbye. At this point I was starting to struggle. The wind was really picking up and it was a headwind. I was no longer flying and I was working hard! I had already decided I didn't want to stop at the stations because I didn't want to risk falling. But I knew I was risking dehydration. People were crashing, lots of flat tires. A water bottle flew in front of me and I hit it, but thankfully maintained control . The girls behind me called out because it scared them. I made the turn around to do the second loop of the Hardy and felt some relief to be out of the headwind. But I can tell you the tailwind did not make up for the headwind. That is for sure. I saw several ambulances take people away. And a guy crashed right in front of me and another girl, and it was by the grace of God that we missed him and didn't all go down. His race was over. I continued south down Hardy just hoping and praying the wind changed directions and the headwind going back wasn't as bad. I hit the turnaround and it was WORSE! It was a constant battle. Going downhill from an overpass and working hard at one point and I was going 8 mph! EIGHT!!!! It was demoralizing. I was feeling defeated. And every pedal stroke hurt. My muscles weren't too bad but my joints weren't taking it well. And I realized I left my RA medicine in my bag and didn't have it on the bike. I have never been good at changing gears, but I can tell you I learned real quick on this ride! In order to keep from swearing like a sailor, I decided I was going to sing. But I could not think of the words to a single song for the life of me! Lol! So I started belting out the ABC's very loudly! Those race calculations I made earlier were out the window! I watched people get off their bikes and and just sit on the side of the road. I watched people walk their bikes up the overpasses in the wind. At 100 miles I thought there was no way I could keep going. I was in so much pain. But I only had 12 miles left how could I give up now. But as slow as I was going 12 miles was still going to take me forever. But then I thought of all the people I would let down, and I kept going. I was relieved to leave the Hardy. But we just kept turning north right into the headwind.As I got closer I started to worry that I was hurting so much I would fall at dismount. But I stopped and saw my family and friends and screamed "I didn't fall!" I was so happy to be off that bike. A volunteer grabbed my bike and that was when I realized I could hardly walk! This was going to be an interesting 26.2 mile run!! 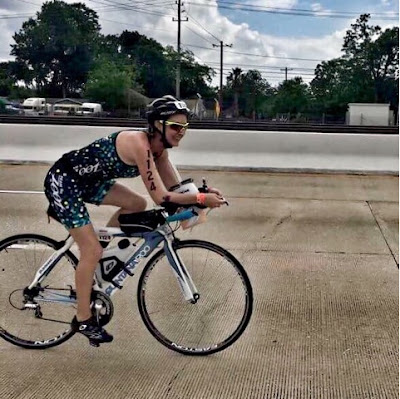 Posted by Iron Will Iron Jill at 4:37 AM