Rolling With The Punches

If there is one thing you will learn very quickly in this sport it is that there is so much beyond your control. No matter what you do, the time you dedicate, the hard work you put in, there are a million things that can derail your plans and you may have little to no control over them. What you do have control over is how you handle what is thrown your way. Do you let it get you down or do you rise up to the challenge?

The Monday evening before the race a few of us were meeting at coaches house for a meeting and transition practice. The meeting went well. It was very informative and I was feeling well prepared for race day. We set up our transition areas to rehearse for race day. I saw the person in front of me had to cut it really tight to turn around, so I thought I would play it safe. I dismounted walked my bike around the turn and hopped back on. Better safe than sorry right?!? I didn't want to take any chances this close to race day. I started to get going and clip back in and straight down to the ground I went. I landed hard on my hip and elbow and my head hit the concrete. Thank goodness for a helmet! Which is why no matter the distance I am always wearing one! Instantly I was nauseous. The pain in my elbow was severe. Right away I thought this is not good. I sat out and watched the rest of transition practices. And the pain was getting worse. As I got in the car and tried to pull away l struggled to back the car out of the driveway. So my coach decided to take me to the ER with her husband following us.

There was no wait at the emergency room and I went right back and then right in to xray. I told the tech I had a race in less than a week and he said "I don't think so." X-rays were excruciating. My mom and dad showed up. The doctor walked in and said "It's fractured." And I fell apart. My coach asked if the X-rays showed the break. The doctor said no but that she and the radiologist agreed from the joint effusion seen on the xray that it was definitely a fracture and that if I had a cat scan she guaranteed it would show the break. I was pretty much hysterical. And the doctor said really annoying things like there are always more races and here's where you decide if your glass of lemonade is half full or empty....I wanted to smack her. Lol! Her approach was not the best by far, but I'm sure she was doing her best to make me feel better. They splinted my arm in a soft cast and put me in a sling. They gave me pain meds and sent me home. It was over. All my hard work. All the blood, sweat, and tears I had literally spilled over the last 7 months was for nothing. I cried. I sobbed. I'm not going to lie, I was full of self pity. That night I cried the entire night.  The next day I was still crying. I got an orthopedist appontment for 4:00 that afternoon. I assumed it was over and I was just going in for a cast. 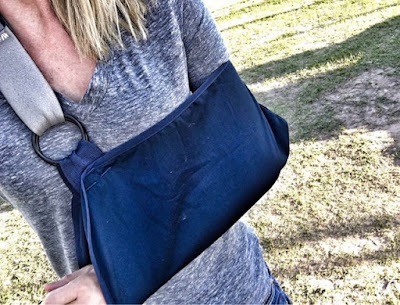 The doctor took one look at the X-rays I brought from the ER and he said they looked great! I was like "What?!?! Is there a chance I can race?" He said there was a chance. He took more X-rays. And it hurt so much I saw stars and almost fainted. I thought there goes any hope! But the doctor came in and said there is no break! He said the pain was likely from the swelling putting pressure on the ulna nerve and bruising. He said to come back in two days and we'll see where we are. I left in pain but with a tiny glimmer of hope!! 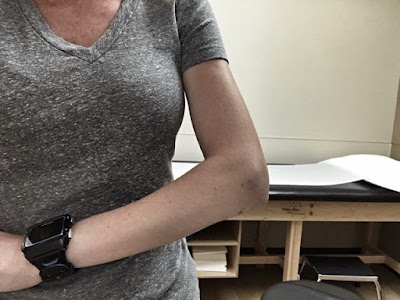 Two days later I was still hurting but I was improving every day. The above picture was taken on Thursday three days after the fall. There was still quite a bit of swelling and pain. But the doctor said I could try to race! If I could tolerate it I could do it! I was ecstatic but I knew it could come down to a race day decision depending on the level of healing and degree of pain that would happen in the next three days. 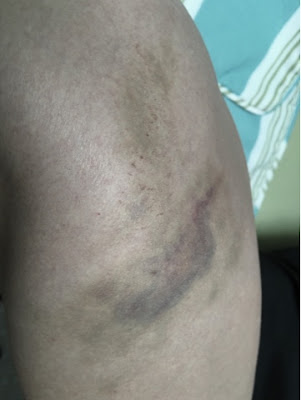 My hip was banged and bruised up as well. And I was sore everywhere at this point. But there was no way I was giving up!! 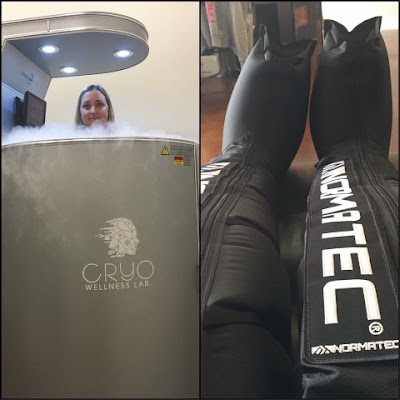 I went to a cryotherapy session and did the Normatec boots as well. I was willing to try anything!! 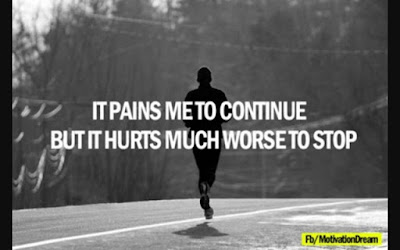 Posted by Iron Will Iron Jill at 3:41 PM