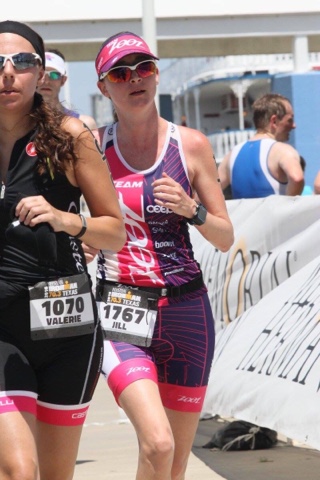 Out of all my pictures this is the only one that I am not wearing a huge smile on my face! I love all my pics because they really show what a good time I was having and how happy I was to be there! This one shows I had to work for it.
Going into this race after falling on the bike all I kept thinking was if I make it to the run I am golden. I am a runner after all. My coach and the doctor had both told me to try out all three disciplines post crash to make sure I felt ok. I was so worried about my elbow I totally ignored my hip. It was bruised and all black and blue but I never considered it as something that could hold me back. So I swam and I biked and I determined though painful I was going to try to race. And during the race it hurt. By time I got to the run my elbow was hurting pretty good but I was to the run so I was golden right?!?! Well that first lap my hip and knee were hurting and I thought I just needed to shake it out. By the second lap it was clear that wasn't going to happen so I was just going to push thru the pain. It was so hot out there and no shade on the course. And I was needing to make up for some lack of hydrating well on the bike. So I made a deal that if I ran I would allow myself to walk thru the aid stations. I had to stop and wait in line for a port a potty too ugh. But at least I was hydrated so that was a good sign. By time I got to that third lap the shooting pain from my hip to my knee was taking my breath away. But I was still so happy because there was no doubt I was going to cross that finish line. So I had a blast thru the entire race until those last two miles. I was trying to hold my hip up as I ran to alleviate the pain shooting into my knee upon impact. But I was not going to walk. Nothing was going to stop me! 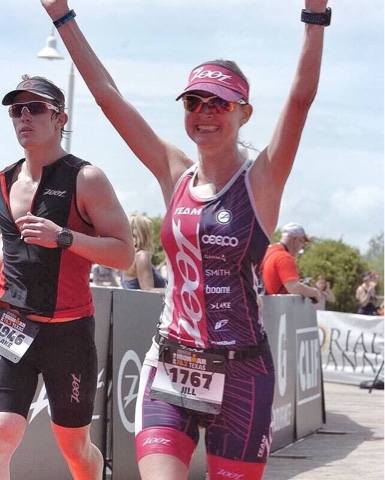 And this picture says it all!! You might not know it but I am crying and smiling. I am excited and relieved. I am overjoyed and exhausted. I am going finish!!!! I have a list of reasons why I almost didn't get to do this race. I have a lot of excuses I could have used not to get out there and try. But I am a fighter. And I fought hard for this! 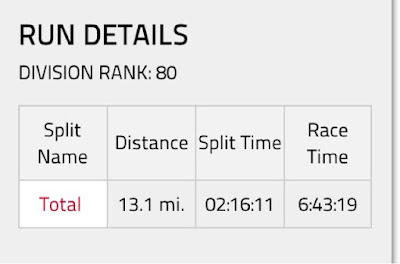 What is usually by far my best discipline ended up being the most challenging. While my pace was not where I had imagined it would be, it still moved me up 26 ranks in my age group.