I started my 70.3 training unable to run due to a fibula stress fracture. I battle my RA every day and sometimes really struggle during a flare up. And now what?!?!?

Just 3 weeks before race day, I had a long run planned for the weekend. Courtney wanted me to run with her to really help her push her pace and I thought it would be great to have a running partner for a change. We had a great time catching up on our run. But throughout the run my stomach and lower back were really hurting and I felt a lot of pressure in my lower region. Our pace ended up being 12 miles at a 9:23 pace which was a PR for Courtney! But I was not feeling well.

When I got home it was pretty scary. I called the dr and they said it was safe to wait until Monday morning to see the doctor. I took it really easy the rest of the day. The next day I had an Open Water Swim planned that I really didn't want to miss. It would be my friend Ivonne's first OWS and I didn't want to let her down. So I went but took it easy. I just focused on the mass starts and only swam 1062 yards. But thanks to my wetsuit my pace was 2:08! Not a whole lot faster than my typical average but I was putting forth less effort. I am glad I made it out there because it seems I still have the mass start anxiety where every time someone touches me I stop breathing and start breast stroking. Ugh! It was great getting out with my friend Ivonne for her first OWS. She rocked it! 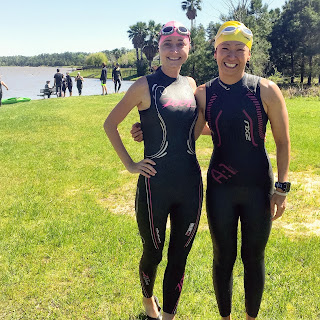 I was so worried going into the appointment with my doctor that he would tell me I was unable to race. I was terrified really! It was 3 weeks out to race day and I had trained so hard for months. It turns out I had uterine prolapse. Basically my cervix had fallen out. And yes it's as bad as it sounds. And on top of that I had a bladder infection too. But I have to say my doctor is the best! He knows how important this is to me. So he put my parts back where they belong and gave me a way to keep them in place until after race day. Then we will discuss surgical repair. Having 4 babies in less than 6 years and heavy training took it's toll. But all I could hear is we can find a way to let you race!!!! And for that I am grateful!

The body sometimes gives us limitations and it is difficult to accept them, but there is no changing it. So you work hard, and you fight, and you never ever give up!
Posted by Iron Will Iron Jill at 2:57 PM