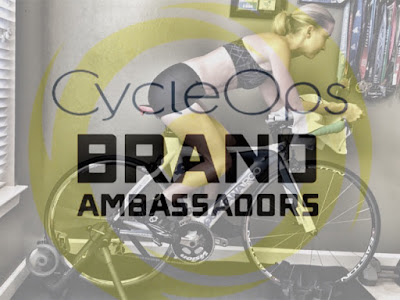 I love my CycleOps Fluid 2 trainer. There is absolutely no way I could get my training done without it. So imagine my excitement about the opportunity to represent CycleOps! I was chosen among just 25 people in North America. And I feel very honored to be a part of this American company based out of Wisconsin that has such a passion for cycling and offers so much support for the cyclist! I look forward to my year as a 2016 Ambassador!

Posted by Iron Will Iron Jill at 5:21 PM No comments: 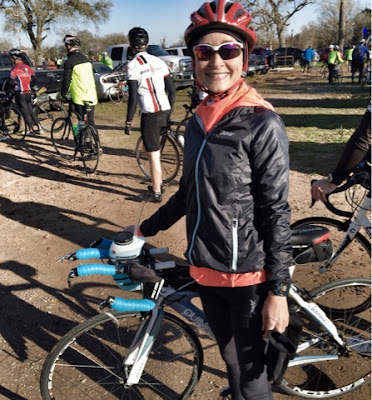 So I signed up for my second group ride. This one is going to be so much easier. I mean it's called Ride the Prairie and prairies are flat right.......
Ok prairies are NOT flat. Apparently this prairie consisted of rolling hills!! Oh and thank you mother nature for wind gusts up to 28mph!!
I chose to ride the 55 mile course. It was a little short at 53.5 miles. And it took me 3:49:23 to ride it!! Ugh 14 mph average speed. With an elevation gain of 1,417 and an elevation loss of 1,355 it was slightly less hilly than Ride Thru the Forest and Hills. But throw in extremely windy conditions with wind gusts that nearly knocked me off my bike and this ride was even more challenging than Ride thru the Forest and Hills. I found myself in crosswinds almost the entire time!
This ride left me feeling very defeated. How could I work so hard and still be so slow. I can tell you the entire ride was a mental game. I often felt like I was in over my head. I began to question my ability to do IM 70.3 Texas. The bike leg is going to add a lot of time to my race. Am I cut out for this? I know I am. I know I can. I have to stay focused!
There are a lot of things I learned on the ride aside from the challenges. I worked on my hydration and drank the entire time which is critical and a huge step for me! Thanks to advice from friends I got a bag that has a magnet top, used baby food containers filled with goldfish and Perpetuem Solids cut up into smaller pieces, and I ate on the bike!! Woohoo! This was huge! Especially in such windy conditions! My last ride I was feeling really empty and had no energy at the end of my ride. Fueling during this ride definitely helped with that feeling! And I gained experience riding in windy conditions which is very likely race day conditions in Galveston.
So all in all, even though I left that ride feeling defeated, it was well worth it! I gained so much from that ride. 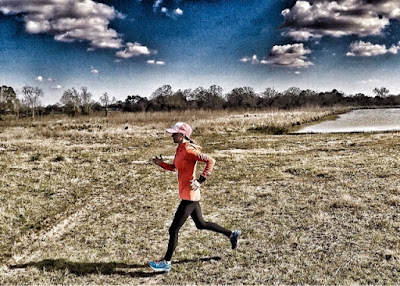 I was scheduled to run 3 miles off the bike. After the last ride I could not have imagined running at all let alone the 13.1 miles I would need to run on race day. But today I got off the bike and ran 3 and it felt good. I fought the wind, but I appreciated having my feet on the ground! There was no real path for me to run at the fairgrounds so I made due with a little road time and some time running in the grass parking lot. My 3 miles was a 9:22 pace in zone 2/3 and it felt really good and easy. So this restored a bit of my confidence. I obviously did something right on the bike to feel good on the run! Now to just turn that something into some speed on the bike and I will be golden!
Posted by Iron Will Iron Jill at 8:46 AM No comments:

Bike Thru the Forest and Hills

On January 23, 2016, Bike Thru the Forest and Hills was the first supported group ride I have ever been on. I really like the feeling of being secure on the course. I like knowing there are police out there maintaining a safe course and I like knowing there are SAG vehicles in case something goes wrong with my bike. I also have a terrible sense of direction. So a marked course is an extra bonus so I don't have to worry about getting lost along the way.
We headed north out to Coldspring, Texas. And as I got closer and the hills got bigger I was wondering what I was getting myself into! Lol! The name of the ride should have given me clue! When we arrived it was 28 degrees outside. So cold! Fortunately I had friends who had prepared me by telling me all the gear I would need to stay warm! It was a lifesaver because the cold never bothered me! However the hills are another story! It was the most challenging work out ever! And it didn't help that I never changed gears and rode my breaks down every hill! At the end there were people getting off and walking their bikes. Not me! I trudged up and down those hills in the wrong gear at 4 mph! Lord help me! Ha! It took me 3:18:36 at 14.2 mph. Slower than a turtle but I survived all 1926 feet of that elevation gain/loss!!
And how fun is it that my new Instagram friend Susan came out to ride with me! Ok not with me but far, far ahead of me. Lol! But we started together and met up after for a bite to eat! She is also training for IM 70.3 Texas at Galveston. I am so excited about our new found friendship! 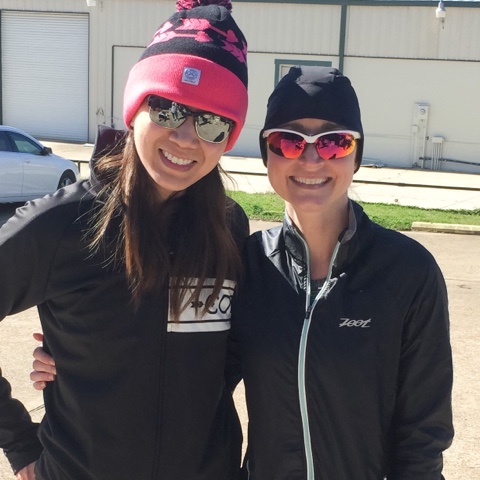 I took part in a core challenge on Instagram led by Heather Rose Scott, Rachael Norfleet, and Leisa E. They did a fabulous job! Every day was a killer core workout that challenged other muscle groups as well. I will definitely be incorporating these various exercises into my workout regimen. 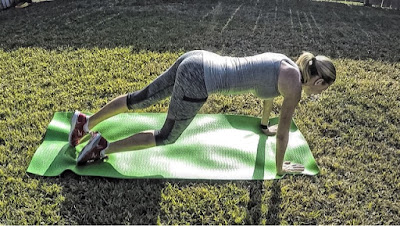 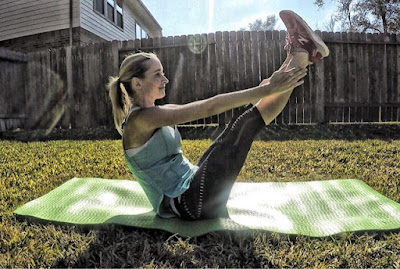 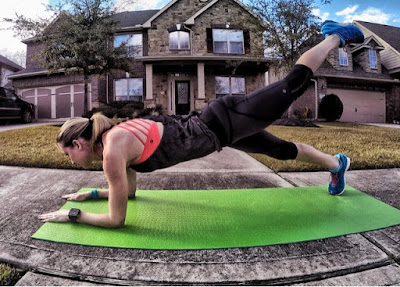 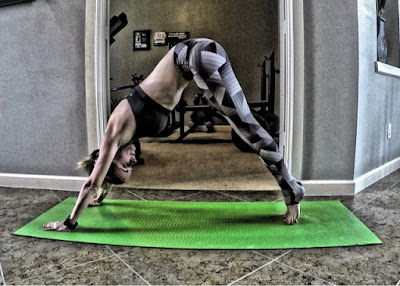 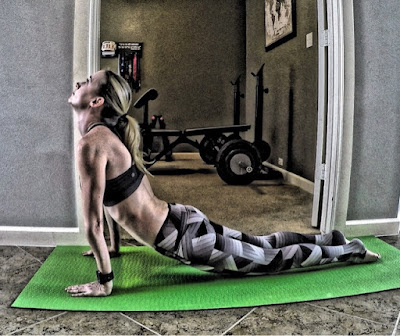 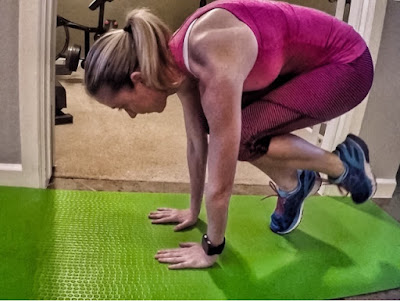 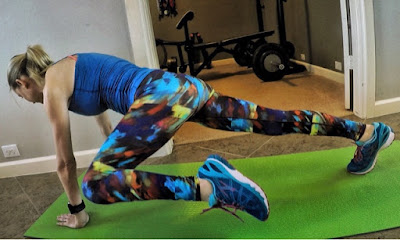 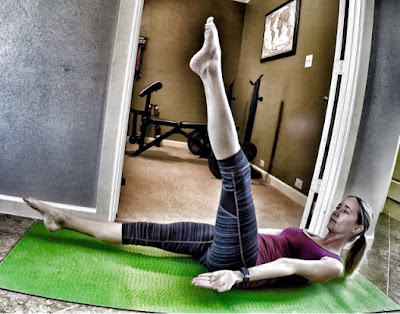 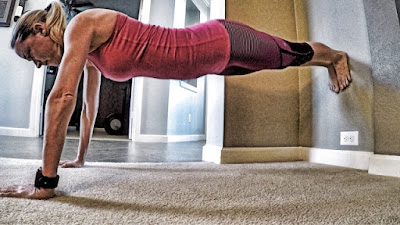 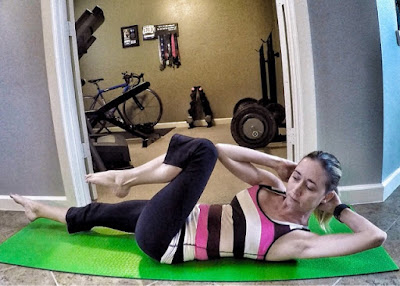 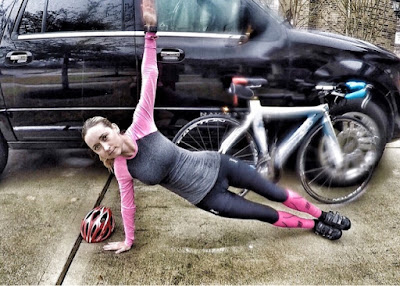 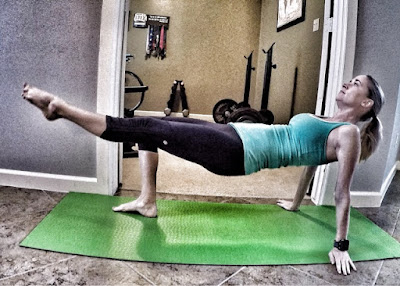 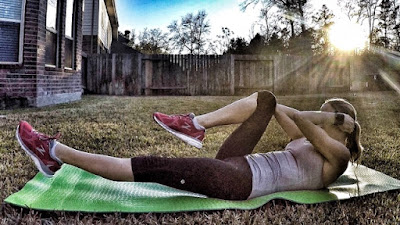 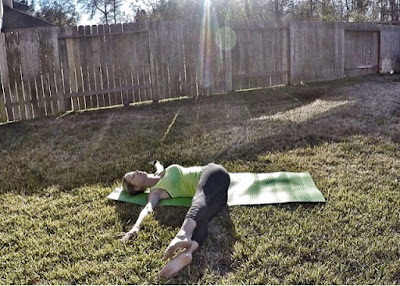 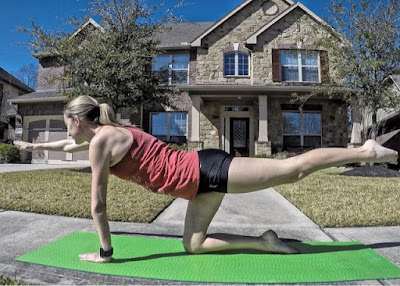 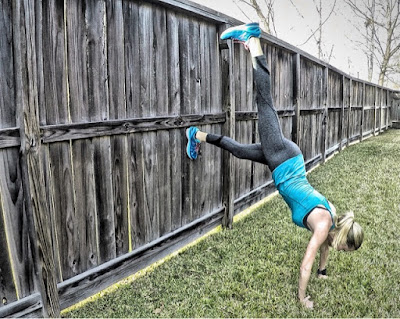 Posted by Iron Will Iron Jill at 8:16 PM No comments: