A Small Victory in the Swim 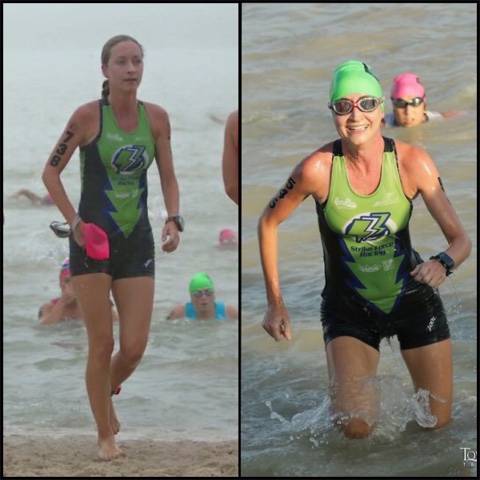 What a difference a few weeks makes! The picture on the left was taken on July 25, 2015 at Cypress Sprint Triathlon where the swim was 550 meters. It ended up being more like 600 meters and times were adjusted to reflect that. As always I struggled. I ended up doing breaststroke almost the entire time. Which is frustrating since I can triple that distance in a pool no problem! My pace ended up being 2:45HM. It was hard not feeling defeated coming out of the water.
Fast forward to the picture on the right taken at Towne Lake Olympic Triathlon on September 7, 2015 just six weeks later. The distance was 1500 meters. The start was rough and consisted of you guessed it more breast stroke. But I pulled it together and was able to finish strong! I cried getting out of the water I was so proud of myself for tackling a swim that was almost a mile! My pace was 2:44 HM! My pace was one second faster when the distance was 900 meters longer! It still wasn't a perfect swim or even what I would like to have done, but it is an improvement! I'll take it!! The picture says it all! Yay for a small victory!
Posted by Iron Will Iron Jill at 9:40 AM