The Cypress Sprint was a 550 meter swim, 13 mile bike ride, and 5k in the Bridgeland Community. It was a really nice course!

SWIM: It was a very foggy morning. The fog was so dense you could not make out the buoys in front of you. The shaded goggles didn't help. During the swim a man was turned around and swimming the wrong direction, that's how little you could see. I started with my usual panic and breast stroke. Eventually I got over it and swam, but it took way too long! I got out of the water feeling defeated, but when I look at this picture I feel strong! It was a tough swim! 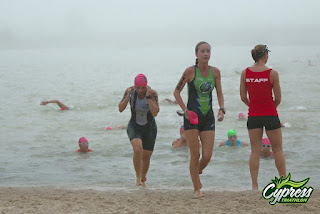 BIKE: The course for the bike was really nice. Mostly flat, but more incline than I am used to. The most difficult challenge on the bike was the 40-44 year old guys were in the wave behind mine and on the bike it was tough because they were flying by me! At one point I was being passed by guys on the left and another guy illegally passed me on the right. I screamed pretty loud, I am sure I was a sight! Ha! While what he did was wrong and potentially dangerous, I really need to get out on the road more so I can handle those situations better. My bike was again my fastest ride yet! My average speed was 18.3! Which is super for me! I got off the bike and sped thru transition.

RUN: When I got to the run I was passing people like crazy! Not a single person got by me. I felt good! But I had my watch set for total time and not pace and so I had no idea what my pace was. I feel like because I was passing everyone I felt like I was going fast, but I probably could have pushed faster. 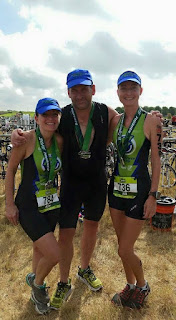 I love having teammates out there racing with me! So fun! Love these guys!