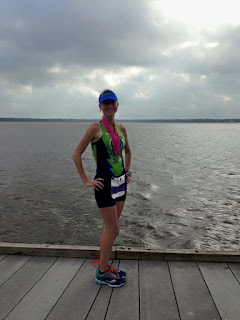 A week after my first triathlon and I was ready to do another one! It was Mother's Day and I woke up early to do the TriGirl Super Sprint. The swim was 200 meters, the bike was 8 miles, and the run was 2 miles. The swim was short but tough! The water was really choppy! I was kicked in the nose, saw stars, and went under. A lifeguard came to my rescue, but I just said thank you and struggled along! Regaining my wits made for a longer than usual transition time. But I got out on that bike and again did my fastest ride yet! It was really windy on the bike course and there were a couple close calls. I made it to the run and flew! So many things I could have done better at the beginning of the race, but I finished strong! And I was 7th in my age group! It was a fun race! 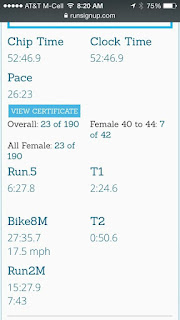