My friend Christy took me out for my first several bike rides. A little less than two months after I started riding, I ventured out on a ride by myself for the first time. It wasn't a good plan! I had been in the hospital twice that week with chest pains from Raynaud's Syndrome. But I decided to head out anyway. Just a few minutes from home, I'm not sure what happened, but I lost control of my bike and hit a curb. I flew off my bike and landed very close to a fire hydrant. I'm very lucky I missed it. But I didn't walk away unscathed. I laid on the ground in intense pain. Cars passed and did not stop to help. I reached my phone and called my husband. He left right away and came to get me. Right before he got there, finally a man unrolled his window to ask if I was ok. Sad how little concern people showed to an injured biker on the side of the road. Thank goodness I wasn't unconscious! Rick brought me home and my mom met us there to take me to the ER for the 3rd time that week. It turned out I shattered my clavicle. It was Sunday and I was scheduled for surgery on Friday. That was the longest, worst 4 days of my life. Every breath I took I could feel my bones shift and rub against each other, I had road rash, constant vomiting, and we couldn't get the pain under control. My mom and dad moved in for that week, so my mom could take care of me around the clock. I could not even go to the bathroom by myself! It was bad! 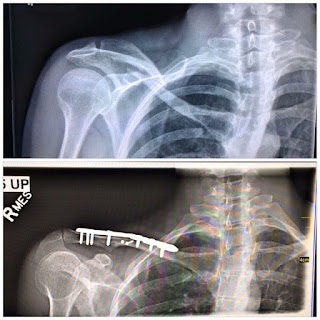 After surgery, I began physical therapy. For months! And I had no range of motion in my right shoulder. The PT kept telling the orthopedist there was another injury from the crash that we hadn't addressed. Finally he did another MRI. The pictures were bad, so the results were inconclusive. He decided to do nothing, so I decided to find a new dr! The new dr looked at the pics from the MRI and said they were unreadable. He ordered an MRI arthrogram of the shoulder. And the results were obvious. I had a severe case of Adhesive Capsulitis. The tissue was thick and very inflammed. And so a second surgery was required. The second surgery was a success and almost immediately I could feel improvement. So after some more therapy I was quickly regaining my range of motion. Still working on it, but the doctor predicts a full recovery! I only wish this had been found four months earlier when I suffered the injury! But all this and I am still determined to do a triathlon!

I got a new bike! 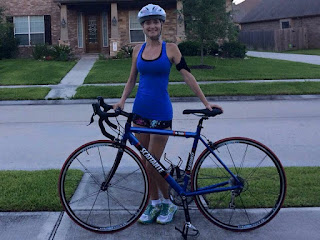 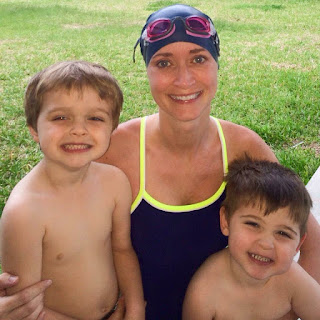 I set my sights on doing a triathlon! I could run, assumed I could bike, but I couldn't swim. So at 38 years old, I learned how to swim! I took lessons from Mrs. Hazel with Sawyer (3) and Emerson (2). I never put my face in the water to swim before. What a challenge learning to swim became, but I kept at it and continue to make improvements!
Posted by Iron Will Iron Jill at 9:23 AM 3 comments: